Making of the gallery 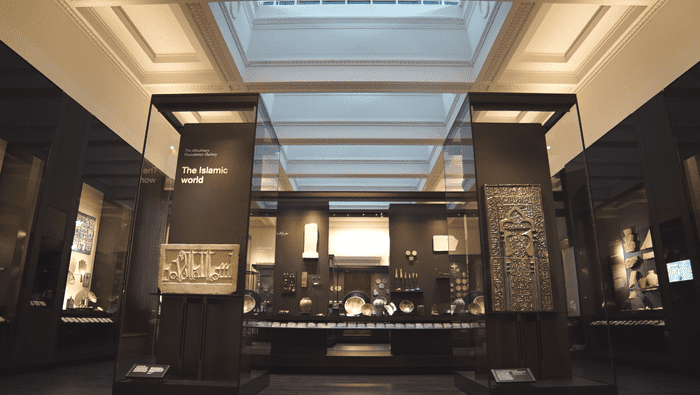 The magnificent Albukhary Foundation Gallery of the Islamic World is the result of several years of planning and detailed research, in collaboration with colleagues both inside and outside the Museum. The aim has been to rethink how the Islamic world could be displayed to present the collection in new and exciting ways for our visitors, and to show the cultural diversity of this vast region.

Without the generosity of the Albukhary Foundation this refurbishment would not have been possible. Their support has led to the beautiful renovation of Rooms 42 and 43. This gift has facilitated new academic research on the collection, and a wide range of objects have been conserved and analysed scientifically to prepare them for display, using the latest advances in technology – an opportunity that would not have been possible otherwise.

The gallery is pioneering for many reasons. It offers creative ways for visitors to engage with the cultures of the Islamic world, from listening to music and stories, to films about how objects were made. We worked with a group of digital specialists, filmmakers and sound engineers to help bring audiovisual context to the objects on display, giving the galleries a new richness. In addition, light sensitive works such as paintings, calligraphies and textiles are on display for the first time, thanks to the expertise of conservators, scientists and mount-makers. These displays will rotate regularly, offering something new to see in the gallery on each visit.

Designers Stanton Williams have worked with lighting specialist Arup to create the new space. The design vision for the gallery was to present the Museum’s important collection of Islamic material culture in an innovative and accessible way. At the same time, the redesign was an opportunity to change and widen the scope and interpretation of the exhibits. This has been achieved by joining two beautiful galleries in the part of the Museum known as ‘the White Wing’, which had been closed and in need of renovation. The White Wing was originally completed in 1885 and designed by Sir John Taylor. It was named after William White (d. 1823), whose bequest enabled a significant expansion of the Museum into a suite of galleries on the site of what had been the garden of the Director’s house.

Islamic art is an important part of the collection. To help us understand and convey the practice and principles of Islamic art, we’ve worked in partnership with The Prince’s School of Traditional Arts to present works by students and alumni alongside the Islamic art objects in the gallery. In addition to the educational material presented, we help to shed light on the objects’ practical, functional uses and on their social purpose or cultural significance. These works show how the objects would have been produced, using the same traditional techniques and materials as their originators.

To celebrate the new gallery the Museum has commissioned its first ever site-specific artworks. Idris Khan OBE has created 21 Stones, an installation of 21 unique paintings, displayed as a scattered formation on a dedicated display wall within the gallery, based on the Stoning of the Jamarat, an element of the Hajj pilgrimage to Mecca. Each piece is made with a unique piece of poetry, stamped with blue oil paint on paper.

Ahmad Angawi has created delicate Mangour window screens in walnut wood that cover five large windows within the gallery. Formed of complex interlocking components, the artwork brings atmospheric light and warmth into the new gallery and creates a unique space for visitors to rest and reflect. Inspired by the rich diversity of the culture of Hijaz, the western region of Saudi Arabia, Angawi has combined traditional Hijazi craft with modern manufacturing techniques to create the latticed screens.

The traditional window screens are based on the notion of duality in that their function is to both conceal and reveal. As Angawi has said, ‘When I was asked to design and make the five screens I started to look at them as five elements or parts of the body. When I saw the windows of the gallery facing one another, I wanted there to be a conversation between them, mind and heart.’

The creation of the new gallery of the Islamic world has been a three-year journey, involving many people, and we’re delighted to now welcome you to experience it.

Modern Slavery Act Statement© The Trustees of the British Museum